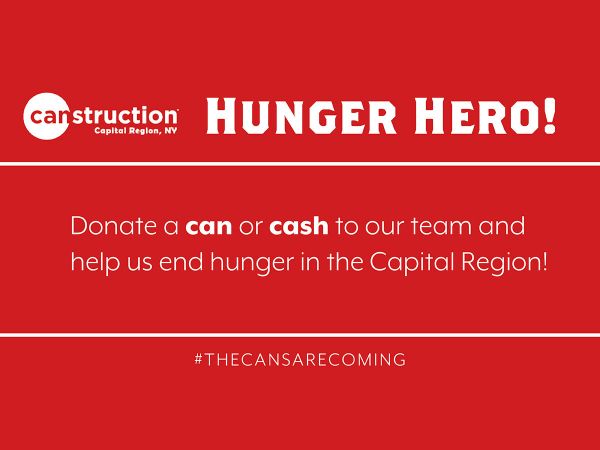 C2 Design Group is back at it as a Hunger Heroes team to benefit The Food Pantries for the Capital District and Capital Region CANstruction.

C2 is collecting non-perishable food items and raising funds to help feed community members that are food insecure. They are collecting food at their office at 24 Airport Road in Schenectady, New York, until February 13, 2020. “Last year, we were the top Hunger Heroes team. We’re back for a second year with the same mission and drive to spread the word about food insecurity. We care about giving back to communities,” said Michael Roman, owner and principal of C2. “We’re committed to doing our part to help provide food and raise awareness in the Capital District.”

There are currently 89,060 people in our region who don’t know where their next meal is coming from. Over 27,000 of them are babies and children.

We are once again teaming up with long-time client and friend, Jon Phillips, owner of Phillips Hardware to work on community initiatives. Roman and Phillips share the commitment to give back to the communities where they live, work, and play. Phillips has again offered to place boxes in each of his store locations to collect food to help support the C2 team. Additionally, he is collecting monetary donations at those stores.

“Great things happen when we all chip in and support our communities,” said Roman. “I’m thankful to Jon and the Phillips family for collaborating with us for a second year to support such an important cause.”